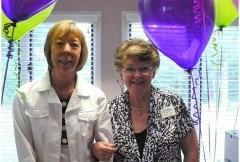 It was a much larger company then but it still had a ‘family feel’ to it, so I was happy to be a part of it...

Every week we share a story with you from someone who’s found their freedom with United Country. From buyers to sellers, from brokers to managers – everyone in the United Country family has a story. Today’s post comes from Chris Roth on our Customer Care Team.

Yesterday, the home office celebrated two anniversaries. Chris Roth and Cheryl Jacks have been with the company for 22 and 48 years, respectively. That’s 70 years between the two of them!

With balloons, cake and flowers, we all shared our congratulations with Chris and Cheryl, who have given so much to this company and everyone in it. Here is Chris’ story: “I first started at United Farm Agency, as it was known back then, in 1969, and I was there just shy of five years.

Later, after raising my family, I rejoined United Country in 1993. I initially joined United because my husband had gotten a job in Kansas City, and we moved here from St. Louis. One of his relatives worked at United and knew they were looking for people.

“It was a much larger company then but it still had a ‘family feel’ to it, so I was happy to be a part of it. There have been so many changes in the company and the technology since I started, and it’s been really interesting trying to keep up. I’ve enjoyed learning new things and being with old and new faces. It’s a great bunch of people!”

Congratulations, Chris! Thank you for everything you’ve done for the company. Stay tuned to hear “Mama Cheryl’s” story later this summer!