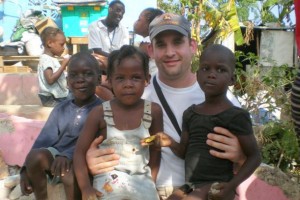 There aren’t many times in life that you can do just a little, and have such a profound effect on so many people’s lives...

Every week we’re going to share a story with you from someone who’s found their freedom with United Country. From buyers to sellers, from brokers to managers – everyone in the United Country family has a story.

Today’s post is from Patrick Gibson, owner and broker of our No. 1 office, United Country – Gibson Realty, in McComb, MS.

About three months ago, a story ran in our local newspaper about a local pastor and his relationship with an orphanage in Leogane, Haiti, which is located just outside of Port-au-Prince. A few days after the story was published, the devastating earthquake hit Haiti. Leogane was at its epicenter. I wanted to get involved and help in some way, so I contacted the pastor. Ten days later, a small group of us arrived in Leogane, and we spent two days at the orphanage assessing what was needed to provide relief for the kids, as everything collapsed at the orphanage.

At the time I arrived, their water supply was not predictable and not clean. The orphanage’s director was able to secure two months’ worth of MREs from some U.S. Marines, and their shelter consisted of a rickety shed that leaks water when it rains. Despite these very difficult living conditions, these kids were surprisingly happy. I didn’t witness a single argument among them. The older girls took care of the young kids, and two “house mothers” took care of the infants.

Per capita, Haiti has an abnormal amount of orphans, due largely to parents giving their children up because they can’t feed them – and it’s either that or watch them starve. There are no government social services to help with this. This orphanage is run by the Dezman Fleury Foundation, which is a non-profit 501(c) entity. Most of the board of directors is from Mississippi, and I have attended a couple of their meetings so far.

Upon our return to Mississippi, an article was published in our local paper once more about our trip. The next day, I received several phone calls from friends who read it and wanted to help. A surgeon wanted to lead a medical trip, someone else offered a facility to house all the children for an indefinite amount of time or until they were adopted or until their facilities were rebuilt, and another offered to donate a water filtration system. Our initial priorities are to establish clean drinking water and to remove the remains of all the masonry structures that collapsed to make way for new construction.

I have seen, firsthand, the devastation and general need of these gracious people. At no point of my visit did I encounter a situation that I felt was dangerous, only smiling faces that were glad to see some help arrive. There aren’t many times in life that you can do just a little, and have such a profound effect on so many people’s lives. This is one of those times, where we had the chance to help innocent children caught in a bad situation.

I’m now actively raising money to support the Dezman Fleury Foundation, because I know the effect a donation will have on these children. They’ll get back to their life, which consisted of going to school, going to church and ultimately preparing for what’s in store for them once they reach 18 years old. We’ll rebuild what this orphanage had prior to the earthquake – a school, church, clinic, dorm, and a bakery that they ran, which allowed them to be nearly self-sufficient.

This orphanage has always served as a beacon of hope to the surrounding area, and once they get back on their feet, they will be able help their neighbors just as they did before.

Thank you, Patrick, for helping these children in Haiti and for sharing your story with us.